Founded in 1871, the Fulton County School System is one of the oldest and largest school districts in Georgia. With a focus on student achievement and a commitment to continual improvement, Fulton has earned a reputation as a premier school system. This long history of excellence is evidenced by the many state and national honors bestowed on Fulton's schools, staff and students.

The Fulton County School System is one of the most unique school systems in the nation. Though not Georgia's largest school system in terms of student enrollment, it is, however, one of the largest systems in geographic area. From its southern end in the City of Chattahoochee Hills to its northernmost tip in Johns Creek, the county is more than 70 miles long. What is known as present-day Fulton County was formed by the 1932 consolidation of the former Campbell and Milton counties, making Fulton the size of three counties. 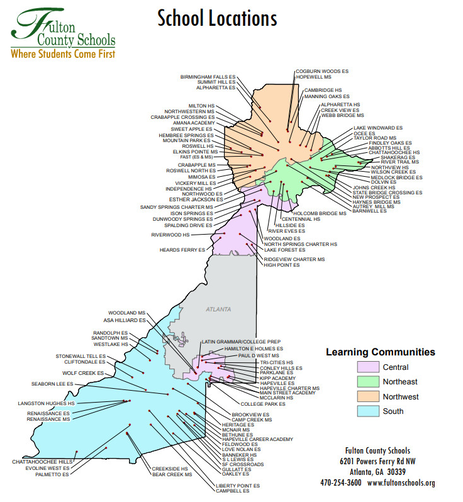 The southern part of Fulton County is comprised of the cities of Chattahoochee Hills, College Park, East Point, Fairburn, Hapeville, Palmetto and Union City. The northern part is home to the cities of Alpharetta, Johns Creek, Milton, Mountain Park, Roswell and Sandy Springs.
As the fourth largest school system in Georgia, Fulton has more than 12,000 full-time employees, including more than 6,800 teachers and other certified personnel, who work in 100 schools and 14 administrative and support buildings. During the 2012-13 school year, approximately 93,800 students attended classes in 58 elementary schools, 19 middle schools, 17 high schools (includes two open campus high schools) and 7 charter organizations (some charters have multiple campuses but are considered one school).

As the Atlanta metropolitan area has grown, so has the Fulton County School System. Families are attracted to Fulton County because of its consistent and well-deserved reputation as a quality school system. Businesses also establish a foothold in Fulton because employees want to live and work in communities with excellent schools. ​
As the fourth largest school system in Georgia, Fulton has more than 12,000 full-time employees, including more than 6,800 teachers and other

Involved, active and informed parents and community members contribute greatly to the success of the system. All schools have business partners and local school advisory councils. The system also receives support and additional resources through the Fulton Education Foundation, a 501(c)(3) non-profit organization that enhances the performance and lives of Fulton County students and faculty through innovative programs and recognition activities.
​​